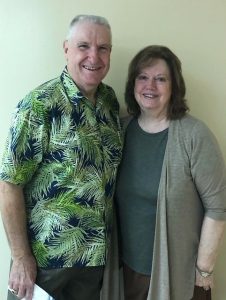 Robert & Mary Martin were born in Haleyville, Alabama. On October 20, 1962 Robert married his high school sweetheart and they have been married 58 years. They have four children who were all raised on the foreign mission field. They have eight grandchildren and five great grandchildren. Their children and grandchildren are supporters and involved in their mission work in the Pacific Islands. Robert attended the Sixth Avenue (now the Gus Nicholas) School of Biblical Studies in Jasper, Alabama for two years. He sat at the feet of teachers like Gus Nichols, Franklin Camp, Jerry Jenkins, Bobby Duncan and others. Robert has been preaching the gospel for 56 years. Robert and Mary have been missionaries (servants) of the Lord for 54 years (seven years in Williamston, South Carolina where they planted the Lord’s church) and 47 years in the Pacific Islands where they continue until this day. Their overseeing congregation has been the Forest Park Church of Christ in Atlanta, Georgia for over 47 years and continues to this day. They have lived in Suva, Fiji Islands; Leone, American Samoa; and Saipan, Northern Mariana Islands. Robert and Mary have pioneered taking the gospel and planting the Lord’s church in most of the Pacific Island nations. Their lives are committed to the work of Jesus in the Pacific Islands. Robert and Mary work together as coworkers for the Lord. Mary has walked the mission trail with Robert throughout the Pacific Islands. Robert has authored many Bible Study books, sermon books and study books on foreign mission work. Robert and Mary have trained 15 missionaries who have or are serving in other countries of the world many of whom work in the Pacific Islands. Their objective has been to evangelize, edify and equip. The results of their efforts has been to plant indigenous congregations that can reproduce themselves, govern themselves and support themselves. You can contact them at: robertfiji@aol.com.  You can also go online to see more of their work with Pacific Islands Bible College.  The North Main Street congregation has been supporting the Martins since 1973.